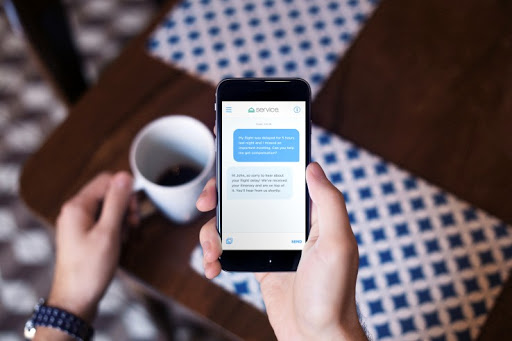 Khosla Ventures famously backed Gripe.io, a startup which allowed disappointed customers to complain loudly on social media about service providers that had failed them (restaurants, hotels, airlines etc). After this barrage of criticism, the brand owner was supposed give in to this assault and settle with compensation. Unsurprisingly it didn't work and Gripe closed. A number of other startups have attempted similar models. But it's very hard to scale this kind of thing, and brand owners instinctively hate the social media blackmail, for obvious reasons. What's required is a new model.

Schneider was an early 'new wave' entrepreneur who created Mobile Roadie, the 'mobile apps for the entertainment industry' startup.

Founded in June 2015, Service is "On demand customer service". If a consumer feels let down by a business, they tell Service, add any supporting documents (like confirmation emails or receipts), and state a desired outcome. A Service problem solver contacts the company, and keeps you informed via email. The customer doesn't have to do anything.

The idea is to broker a fair resolution between the consumer and the business. They represent the rebirth of the middle men we have previously written about.

In June Service garnered a pre-Seed round of $540k raised from Arena Ventures and strategic individuals.

Schneider now reveals that in September he and his team raised a Seed round of $3.1M led by Founders Fund, with participation from Menlo Ventures, Maveron Ventures, Eight Ventures and a handful of strategic individual investors.

He says the startup has now been used by over 1,000 users and over $100,000 has been recovered or saved for consumers (with half of that in the last 30 days alone).

"We don't drag the company through the mud. We're private and discreet. There is no blackmail involved . We want to become a verb. It's of huge advantage to companies to stop the trashing on social media. Right now we are free to both companies and customers as we figure out a model," he told me. "We're building software to scale. Three months ago it took us 30 mins solve a complaint. Now it takes us 15 minutes. There is a lot of automation going on underneath the hood."

The team is 8 people, half engineering/product, half resolution specialists (people solving cases). It's now live in the US, UK, Canada and Australia, but has solved problems in other countries.